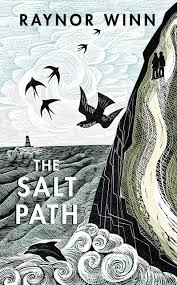 Linking up with Modern Mrs Darcy for QuickLit as usual. I rarely read memoirs, and this month I squeezed in two. Retrospectively, I'm not sure it was a great idea because I was feeling emotionally sensitive during a second lockdown, and real-life pain is much worse than fictional pain. But both were worth reading.

The best way to describe this quirky novel is that it's a Brothers Grimm story in a modern setting. Going back and forth in time, it tells the story of how the Lee family women, makers of seemingly magical gingerbread, came to the UK from Druhastrana, a country most claim does not exist, and for Harriet Lee's quest to reunite with her childhood, changeling friend Gretel. Weird, but I enjoyed it.

This was a memoir I simultaneously felt drawn to read and dreaded reading, because I knew it was going to be harrowing. In mid-life, Winn and her husband, Moth, lose everything, and in the same week, Moth receives a diagnosis of a fatal degenerative disease. With no home, little money, and nowhere to go, they decide to walk the 600-mile South West coast path of Britain, wild camping on the way. I picked it up for the Dorset connection and nature writing, but ended up learning a lot about homelessness. Although the ending was positive, it still left me drained and disturbed - but in a way that a deep book does. Highly recommended - one of my top books of 2020.

P.G. Wodehouse - A Pelican at Blandings

I had to read something lighthearted after The Salt Path, and knew this wouldn't have any hidden surprises. Poor Lord Emsworth just wants to be left in peace with his prize pig, the Empress of Blandings, but he is plagued by the arrival of his overbearing sister Connie, star-crossed lovers, and wrangling over a nude painting. Enter his unflappable brother Galahad, as usual, to sort all out and make every ending happy.

In 1922, worn out by fame and broken by PTSD (which of course was not recognised back then), Lawrence, aka, Lawrence of Arabia, took an assumed name, and managed to enlist as a common airman in the RAF, hoping to be erased and made anew. This is his memoir of that experience (published after his early, accidental death) - raw, concise, painful and quite a departure from the sprawling, genre-defying Seven Pillars of Wisdom. Part of the fascination of this book is that Lawrence could never have got away with it in our digital age. Language warning - you probably did not know that people swore like this in the 1920s!

If you want to read more about Lawrence, check out my account of visiting his grave in Dorset. Oh, and one of the characters in my novel, A Dorset Summer, is inspired by him. Considering that I am not interested in either politics or the military, my obsession is a little odd :)

Hoping that Father Christmas brings you all you wish to read!