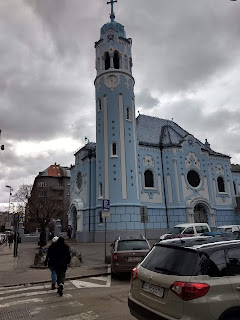 It may have been our daughter's wish to spend her half term shut in her room, but her cruel parents felt she should widen her horizons, so we trooped off for a short business/pleasure trip to Bratislava, the business part being Ted's visiting a collaborator and giving a talk. The drive was long (for Europe), five and a half hours. We crossed Slovenia, then drove all the way through Austria, turning right at Vienna to hit Bratislava, not far over the border.

Bratislava is the capital of Slovakia, if you are scratching your head (I admit, I had to pause and think about it when Ted first mentioned going). It has been known by various names - Bratislava was only fixed after the 1918-19 revolution. Actually, it was nearly named Wilson City because of the support Woodrow Wilson gave to Slovakian self-determination. I suspect they would have reconsidered that during the Cold War.

Linking up with Modern Mrs Darcy for another year of monthly reading round ups. January reading got off with a bang, thanks to some shorter classics and frothy page turners - and sickness in the family (lots of hanging around time). Reviewing it, I noticed that my favourites this past month were by women authors who struck out on their own in some way.

Daphne Du Maurier - Frenchman's Creek
Sickened by the shallowness of life as a courtier under Charles II - the meaningless love affairs, the contrived intrigues - Dona, Lady St. Columb, flees London for her husband's Cornish estate, only to find real love and deadly conspiracy in the person of a French philosopher pirate. But this awakening to an authentic life ultimately demands a serious moral reckoning. Only in the hands of a master such as Du Maurier can a novel be both reflective and roistering. A perfect start to the reading year. This is the fifth Du Maurier I have read, and I would rank it fourth.*

I meant to post this earlier, but after a good start to January, three quarters of us were struck down with a flu-like virus. However, since I expected us to get far sicker in the move to a new country, I am not complaining. So, back to the Croatia vacation...

Our last destination in the Krapina region was decided by Robocar Poli. That is, Maribor had been on our list, but every time I turned on Youtube for Alcuin's current favourite show, there were ads for the Advent Market in Zagreb, the capital of Croatia, which has apparently been voted best in Europe for several years - and was only about 40 minutes away from our AirBnb. And so, for one of the very few times in my life, I succumbed to direct advertising. 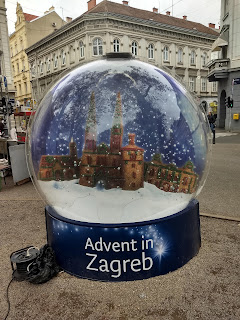 I'm not sure exactly what I expected of Zagreb. The name, of course, conjures up stereotypical eastern European images of a grim, post-communist concrete wilderness.