In which the more I write, the more I tie myself in knots over the upcoming holiday, and explain why my husband thinks I'm a witch.

1. I start with a dangerous point, since readers of Seven Quick Takes are mostly American. But there's a nagging guilt I feel this time of year, that, up until this point, I've not been woman enough to confess to the Internet: I really dislike Halloween, US style. There, I said it. Thanksgiving - now that's a wonderful holiday. But Halloween? I've just never been able to understand what dressing up as a princess and walking around with a plastic bucket collecting cheap candy actually has to do with Halloween.

2. And what's with the Halloween season? Surely it's pretty tiring for a ghoul to be out of the grave from early September to the end of October. Having said that, I confess we have a total of one house on our street decorated in full Halloween style, and it's the one rented out by - and sitting next to - the Southern Baptist church. But I live outside town, where houses are far apart. I think we've had one single trick-or-treater in nearly twenty years. Most of the time our porch is darkened while we're in town getting richer pickings, because my children love the holiday even if I don't, and I'm not a total pumpkinpa-loser.

3. Actually, I'm more sorry that it's gaining such traction in the UK, because (cue alienating even more 7QT readers) it overshadows one of my favourite holidays: Bonfire Night (Guy Fawkes). And let me quickly say to Catholic readers that, growing up, it was all about bonfires and fireworks, with a nod to celebrating our escape from the plot to blow up Parliament and the King in 1605. I was an adult before I learned that there's a remote place or two in the UK that actually has an anti-Catholic slant to the celebration. Generally, if we burn an effigy that's not Guy Fawkes, it's a modern-day politician. Not that I'm trying to give election-weary American voters any ideas...

And while I'm at it, here is an ad for fireworks safety from my childhood:

4. Aha, you say, so Guy Fawkes has evolved and that's OK, but it isn't acceptable that Americans have shaped All Hallow's Eve? And does it matter, anyway? There's no linear history of Halloween; like most liturgical holidays in the British Isles, it has the flavours of older cultural traditions. The one most cited - Samhain - is a festival reinvented by pagans. We know little about the original other than it was perhaps a time to celebrate before winter set in, and maybe a time when the veil between the natural and supernatural worlds was believed to be very thin, like Midsummer. The Scottish most likely brought over their version of Halloween to the US, where the middle classes eventually tamed the wild parties into something approaching the celebrations that go on now. Or some such narrative.

Well... no, I didn't say that. I've just never been able to feel the masquerade spirit. That's for Mardi Gras, another holiday the US does really well. I lived in Louisiana for a while. Enough said :)

5. We didn't really have trick or treating in England when I was growing up, but we did have the odd Halloween party, where you dressed up as a witch or ghost or something supernatural, and did things like bobbing for apples and telling scary stories. We didn't have pumpkins for sale at the greengrocer's, either. I remember buying a turnip to carve as a lantern for a Girl Guides (Girl Scouts) party. Sad, but true.

6. And I was scared on the night of October 31. Really scared. I used to gather up all the crosses I had, tuck them under my pillow, and long for it to be past midnight. That was 'real' Halloween. No, I don't want my children to get nightmares, but I do want them to grasp the concept that there is a supernatural world, and that there are negative spiritual forces, but that we can overcome them every time. Just preferably not dressed as Barbie. Maybe Buffy, though.

7. And now you know I'm a Halloween hater, how is it that my husband still thinks I'm a witch? Well, the other week, he was suffering from being the last one in the family to catch a weirdly long-incubating stomach bug. As he was stretched out prostrate in the armchair, clutching his stomach with one hand and typing his symptoms into Google with the other, I offered to make him a cup of mint tea. He looked up from the World Wide Web and groaned, "Witchery." Which, as I pointed out when I stopped laughing, is technically true since herbalism comes under the umbrella of witchcraft by some definitions. But Google is apparently run by witches, too, since that was the number one remedy he found.

So, if anyone is still reading at this point, or can see the screen through the Holy Water they've thrown at it after #7, please hop over to Kelly's at This Ain't the Lyceum. I'm sure she loves Halloween through and through. 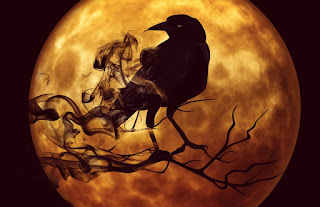 7 Quick Takes 41: Of Schubert and Squirrels

1. I enjoy reading 7 Quick Takes about others' daily lives, even though I usually go for themed posts myself. However, I feel in need of the comfort of the ordinary right now- because I am sick, sick, sick of the elections. I'm avoiding Facebook for that reason - I tend to only be Facebook friends with people who are civil, but even my feed is being poisoned by the vitriol of politics. Honestly, I think that all campaigning should be halted, right now. Everyone can go home, we can all calm down and regain our sanity, and then those of you that have a vote (not me, I'm not a citizen) can go to the polls in November with a clear head.

2. Washing machines. Is that a non-political topic? We got only the second washing machine of our marriage the other week. It's a front loader - hurrah! I never did feel at home with my top loader. I suppose it's a cultural thing. How can you stand not to watch your washing go around and around through the little window? And the nice people at Samsung actually sat around and thought about how annoying it is when all your appliances beep at you, because when the cycle is finished, the machine plays a theme from Schubert's Trout Quintet, and very prettily, too, for a computer.


I don't think there are any little musicians inside my washing machine, but you never know...

3. Babies - surely that's a safe topic, too. Alcuin has finally got to his clingy stage. He steadfastly believes I have a diabolical plan to run away for ever, and that he can only thwart it by screaming "Mum-mum-mum" every time I leave the room without him. Not even going to the loo is safe - he has to run after me and sit on my lap. I think he knows I have the toilet equivalent of floo powder on hand and am about to disappear down the bowl.

4. ...and animals. The neighbour's dogs started to get very annoying on our daily walk. I don't really mind the yappy Boston terriers, but one of the larger, shaggy mongrels was beginning to get up very close, growling. Yelling just didn't seem to work. Then, after a few days of this, I got angry. I stopped, turned, pointed, and said sternly, "No! Go away." He stepped back a few paces, gave me a hurt look, as if to say, "Now you've spoiled all my fun," and left. The next day, he came running out at the sound of our approach, saw it was me, and stopped in the driveway. The day after - he didn't even bother. Just call me the dog whisperer.
The only downside is that the baby actually liked all this doggy entertainment. Now, he woofs, and shakes his head sadly.

5. It was "woof" because, despite having a wide vocabulary, he prefers to communicate with sound effects and gestures rather than words.  If he wants me to do something specific, he places my hand on the spot - literally, the task at hand. The other day, he pushed his dad to a clear spot in the bedroom - so he could ram him with a cardboard box.


6. A couple of mornings ago, I got up to a squirrel head and upper torso on the rug. (Imagine: head, shoulders, and little arms sticking out. You're welcome.) Used to the cats' Godfather-like offerings, I stumbled into the kitchen, grabbed paper towels and cleaner, and got to work. Later in the day, one of the cats brought in a lizard, which detached itself from its tail and escaped. I picked up the still wriggling tail... and suddenly got grossed out. Go figure.
And yes, mutilated animal parts beat politics right now.

7. The only person currently using the girls' bathroom is my thirteen year-old. So how is it that she can stand at the sink and get mud and make up on the walls four feet behind her?

There, that made me feel better. For other, hopefully cathartic quick takes, glide over to Kelly at This Ain't the Lyceum.