"We are entering a messy area of eternal discussion," wrote my friend from the International Office.
What were we negotiating? Deciding on gender neutral translations for a highly gendered language? Precision vs readability?

In fact, it was the annual children's party, and the question he threw in my lap was how to translate the name "Dedek mraz" in the invitation, "because there are many different good men delivering gifts in December."

I am a purist. I voted for the literal name: Grandfather Frost. Because that's who was coming. 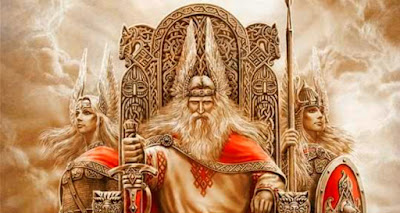 Grandfather Frost is the communist answer to the saintly Nicholas or decadent western Santa. He has his origins in Morozko, the stern, often deadly god of frost and ice. No ho ho ho here. As far as my research can tell, there is no clear-cut story of his transformation from Slavic god to gift giver. Labelled a demon by the Orthodox church, legends of Morozko grew and developed over the centuries (here is a popular one), until Dedek mraz eventually became a useful figure for the soviet regime, diverting attention from Saint Nicholas and Christmas with his New Year's gift-giving. 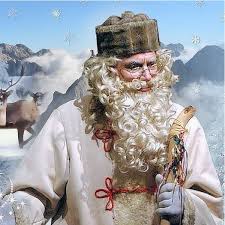 His name and appearance vary across Eastern Europe. In Slovenia, he is dressed in pale robes, with a dormouse fur hat (here I have to pause to say that Slovenian dormice are large creatures, not the tiny ones you might think of).

In case you are feeling outraged at these cute little creatures being killed for their fur, let me reassure you that it is also known as the edible dormouse...

Nowadays, instead of freezing maidens to death, in Eastern slavic countries, Dedek mraz is sometimes accompanied by his grandaughter, the snow maiden Snegurochka. 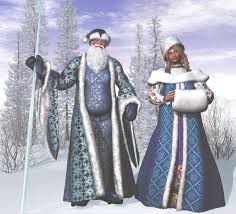 Coincidentally, I just read a retelling of the Morozko legend involving the Russian folk heroine Vasilisa the beautiful, The Bear and the Nightingale, by Katherine Arden. If you like your fairy tales dark, I recommend it.

And the party? I was afraid Alcuin would be scared, but the education students warmed up the audience with a cute play about a mouse who lost her house. Then they got the children to chant for Dedek mraz, and by the time he appeared, gift bags in hand, Alcuin was ready to leap over and grab his loot. He was so quick, this is the best photo I could get. 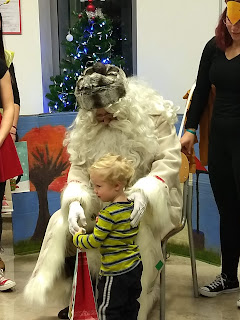 Indeed, many good men have come gift giving. We modestly celebrated Saint Nicholas Day on the 6th, and we'll have the traditional December 25 visit from Father Christmas, with a final present from the Wise Men on Epiphany. I think our new Slavic tradition is going to go down well in our household.

Linking up as usual with Modern Mrs Darcy for QuickLit. It was a superlative month to finish out the year, squashing three tried-and-true favourites between quick coffee-time reads. 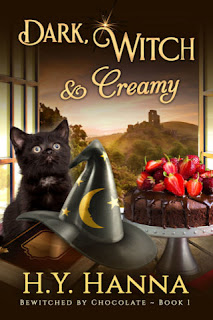 H. Y. Hanna - Dark, Witch and Creamy
Oh yes, I did. After being contaminated by The Gathering, I needed the literary equivalent of sitting down with a big slab of cake (because stress eating works). This was free, I am mildly curious as to what the appeal is in paranormal cosies, the author is an Oxford graduate, so I thought, why not? It has witches, chocolate, a kitten and murder. The beginning was a little cringe worthy, but I soon got into it. I read it in a day and it left me happy, which is a type of literary merit, I suppose.

Rumer Godden - In This House of Brede
If Dark, Witch and Creamy was not enough to rid myself of the taint of the aforementioned book, a 500-page novel about nuns finally cleansed my soul. This is the story of a group of cloistered Benedictine nuns, focusing on Phillippa, who leaves a successful career in government mid life to pursue a vocation. Godden makes the inner and outer lives of the Benedictine nuns so tangible, I was there in the monastery, hooked on the drama of living in community, even though you get several hundred pages in before anything conventionally dramatic happens. Wonderfully crafted, too, almost like a documentary at times. I almost wept when I got to the end and had to leave Brede.

Sue Monk Kidd - Dance of the Dissident Daughter
The author of The Secret Life of Bees traces her transformation from Southern Baptist wife and Christian inspirational writer to claiming a feminist spirituality outside the church. I would go with the Goodreads reviews on this: It will meet you where you are, and you will love it, or it will leave you flat, maybe irritated if you see journeys to the sacred within us as narcissistic. Having rubbed shoulders with Southern Baptists for twenty years, I empathised with Kidd's dilemma, and the book certainly gave me a better understanding of those espousing a feminist spirituality, but I cannot say it resonated strongly with me.

Dodie Smith - I Capture the Castle (audiobook, read by Jenny Agutter)
An eccentric, genteel, impoverished family living in a ruined castle. Yes, please. This is the type of novel I wish I had written. Through the journals of seventeen year-old Cassandra Mortmain, we learn of her family's plight, sinking into ruin thanks to a 'literary genius' father who has not written for twelve years. Then, the American heirs to the nearby estate arrive, and a Pride-and-Prejudice-style marriage plot is set afloat to save the Mortmains. The plot could easily be cliched, but Smith subtly traces the emotional and intellectual growth of Cassandra across the course of the year to give it a depth belied by the age of the narrator. Beautifully read by the accomplished British actress Jenny Agutter - I put my life on hold to finish this.

Dylan Thomas - Under Milk Wood
This prose-poem "play for voices" was on my definite TBR list for this year. It depicts a day in the life of a Welsh village, from dreamtime to dreamtime. As I opened the book, I had the inspired idea to look up a performance and listen as I followed, so that I could really take in the words. I recommend that, if only so you actually know how all those Welsh names are pronounced! I was fortunate to immediately find the radio cast led by Richard Burton. I listened to it in an evening while my husband was away. A literary nerd experience.

Maggi Andersen - The Viscount's Widowed Lady
I am shamefully behind on reviewing books for members of my critique group. I had read a few chapters of this novel when it was a WIP, and wanted to finish the story. I don't read romance as a rule, but I liked how Althea stood out even among Maggi's always-relatable heroines. She is a widow from an abusive marriage, and although she guards her heart carefully, she is still open to love and strong enough to fight for what matters to her. Viscount Montsimon, an investigator for the king, is at first only interested in seducing Althea, but she quickly becomes embroiled in his latest mission; her late husband had in his possession something that several people would kill for - and Althea stands in their way.