I have several ideas for themed posts bouncing around in my head, but life's been hectic, so here is a cheating 7 Quick Takes that randomly divides our back-to-school multiple fails.

1. Week One. We've been back in the US for a week, no extra curricular activities have started, and my husband and I don't go back to teach for two weeks. A perfect time to ease my twelve-year-old into homeschooling with a lighter lesson load, right?
Wrong. Unlike every other new school year, she seems to have zero motivation, or a big distraction in her new baby brother. Every time I check on her, she's reading, writing her novel, or playing 2048 or some new word search game on her tablet/computer.
I try to tell myself it's only a first week. Out loud I have a break down about my inability to manage life and declare she'll have to enroll in school. I pull myself together and plan for a better next week. Maybe the problem was not enough structure.

2. That weekend, one of her rats gets sick. After much back and forth with the vet school on their emergency line, we hold out until Monday, since she's drinking and eating (but only vanilla Greek yogurt). On Monday, the vet diagnoses a lung infection that went to her ears. She comes back with 6 medications/supplements she has to be fed per day. Plus, she has to go back to the vet every morning to spend 30 minutes in a nebulizer. Except my daughter gets muddled and thinks its a sodomizer...
I try, try, try to encourage my daughter to schedule work time before she leaves and take along work every morning, but she has three rats in three cages to feed (sick rat has to be separated from companion; third rat we bought gets attacked by said companion, hence three cages) plus medications.
In an effort to keep my daughter focused, I forbid her from doing any work in her room without permission, and despair of her ever getting a proper education, despite the fact she's in seventh grade and doing Algebra I and is on her fourth year of Latin.

3. I go into work for a meeting, leaving everyone in charge of the baby, plus a bottle of formula. I return two hours later to the relief of everyone and a very unhappy baby. I have never felt so popular. On the downside, I have to go out and buy a breast pump. I am not blind to the irony that now I am finally laid back enough not to mind giving a baby the odd bottle of formula, I have one who isn't interested. I start to make plans to nurse the baby in class and slap a Title IX lawsuit on anyone who complains.

4. Week three - almost a full school schedule, and the semester begins for my husband and I (I'm teaching two classes two afternoons). I have to get up extra early each morning to pump milk. Before I go in on Tuesday, I try to nurse the baby. He is outraged that I dare to make him feed not on his personal (random) schedule and starts screaming. I leave in trepidation. Half way through, I text my elder daughter as I don't dare call my husband to see how things are going. When she doesn't reply, I imagine the worst. Eventually, she texts that things are OK. They survived by trying to keep him asleep all afternoon.
That same afternoon, $250 and a week of daily vet visits later, the rat dies. If Saint Francis isn't pleading for me at Judgement Day, I want to know why.

5. Off to class again on Thursday, leaving half a bottle of breast milk and one of formula. Get home to find the baby has taken about an ounce, but surprisingly not grumbled over much. Apparently he knows where the real stuff comes from and isn't going to be persuaded otherwise. I think we have to resign ourselves to the fact he is going to fast the few hours I'm gone, and count the weeks until we can give him solids.

6. TGIF - really, really TG. Trying to catch up with housework as we've got two people staying this weekend. Promise my daughter I will take her and her friend for frozen yogurt if she finishes her work, but she spends so long on a Galileo report there's no hope of that. I've just broken down and said I'll take them anyway. I need the sugar calcium.

7. And I'm not even thinking about the fact we are flying with my elder daughter to Boston and MIT at the end of the following week. Yes, I have a three-month-old and a college freshman. Proof that God has a sense of humour.

For more quick takes, join Kelly at This Ain't the Lyceum.
No comments:

I've been away for a month in the UK, and the new semester is looming, so here's a super-quick Seven Quick Takes. Having lived in the US (mostly Mississippi) for twenty years, I often feel an outsider in both countries. On the plus, I *think* I'm better able to see the good and not-so-good in each culture. Here's some shallow light-hearted examples of British Things I'm always grateful to get back to...

1. Yay for outlets where you turn off the power at the socket. It used to terrify me to have to pull plugs out of a live socket when I first moved to the US. Of course, having lived away for so long, sometimes I forget to switch it on and come back hours later to find my phone etc. hasn't charged.

BUT... regulations are so strict, you are forbidden to have either an
electrical socket or a light switch in the bathroom (you have to have a pull switch or a regular switch outside the door - good for throwing your enemies/siblings into darkness at crucial bathroom moments).


2. The national impetus to recycle. In Mississippi, we live outside town and have to drag our recyclables up to work where we (illegally? I'm not asking) use the campus bins.

BUT... the bins, the bins! My parents only have three: general recycling, food waste, and unrecyclables. My aunt in London has five. All have to be properly sorted for the dustmen (refuse collectors) or you get to face the wrath of the local council My parents' local council was even talking of putting microchips in the bins, I suppose so one can instantly report recycling offenders or the rubbish 'swingers' who are bin-swapping.

3. Water conservation: small sinks and baths, plus one bathroom, encourage you to be less profligate with water.

BUT.. as Kelly at This Ain't the Lyceum pointed out, low-flow toilets don't get the job done. And they're mighty embarrassing if you're a guest and can't find the toilet brush.

4. Talking of number three: One bathroom per house. I'm disappointed that more people in the UK are getting extra bathrooms and toilets put in their houses (and I'm not even starting on the second kitchen trend among the more wealthy/show-offs in debt). I hate having to clean more than one bathroom. Our family of four managed with one when I was growing up, and it made us keep a lot of our bathroom clutter out of the bathrooms and in our bedrooms. Disclaimer: the toilet was in a (teeny tiny) separate room from the sink and bath, which avoided having to cross your legs if someone was having a leisurely soak.

BUT... see disclaimer above.

5. The National Health Service. It has its problems, but you can't beat it for everyday care. My elder daughter had to go for a check up after getting mild appendicitis in Italy (that's another saga). She saw the doctor that day - no fuss, no co-pay, no insurance so complicated even the doctor's office don't know what to bill you, no unnecessary weighing, temperature check etc., no being lured into the doctor's consultation room to wait for an hour until he pops in.

BUT... she was a little freaked out at the instructions in the waiting room on how to use her ten-minute consultation (actually he took 30 minutes with her).  And getting good hospital care is a lottery.

6. A curry house in every city, town and village (almost). Plus the obligatory After Eight mint at the end of the meal. Bonus points for 70s decor, 'exotic' Indian art and Bollywood music. At one point, chicken tikka was Britain's No. 1 favourite dish.

7. And the reason for the title? In case American readers felt I wasn't fair enough, here's a tongue-in-cheek song about our favourite 'British' Things via Queen Victoria and Horrible Histories. For some reason, I could only find it with Portuguese subtitles, which adds to the irony... 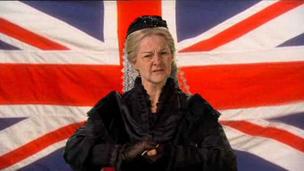 For more Seven Quick Takes, visit Kelly, who hosts at This Ain't the Lyceum - she has a special and inspiring post for Spinal Muscular Atrophy awareness week.