Linking up with Modern Mrs Darcy as usual for quick book reviews. At last, a book to get me out of my reading slump! In fact, October picked up in general.

John Fowles - The French Lieutenant's Woman
Like other readers before me, I thought I was picking up a historical romance, fuelled by the iconic image of the woman (Meryl Streep) standing, windswept by the sea in the film version (which I haven't seen). 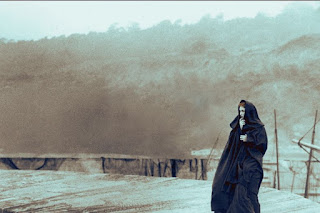 Yes... and no, no, no. Written in 1969, this is on one level a Victorian, very Hardy-esque (deliberately, given that it's set in Dorset), emotional novel about a gentleman who considers himself modern, yet finds his life upended and his mores challenged when he becomes infatuated with an 'outcast' woman, while engaged to an icon of young, pure Victorian womanhood. At the same time, the novel has an omniscient narrator ever ready to remind us that he is only pretending to be a Victorian author, and who steps in to analyse both the Victorian age and the conventions of Victorian novels. The technical term for this is, I understand, metafiction (a novel aware of its own fictional status). At this point, you are probably scrabbling for your TBR list, or scrolling down the page. I loved it. Definitely one of the best novels I have read this year.

Nancy Warren - The Vampire Knitting Club
It was free, so, with a title like that, how could I resist? It also has a bonus kitten (I mean, not literally, though my family would appreciate that). It was professionally written and engaging, but, and I say this without irony, it lacked soul. I might, however, read another in the series if I didn't have to pay for it.

Sue Monk Kidd - The Invention of Wings
I get to feel a little smug here, because I actually knew about Sarah Grimke, the American abolitionist and women's rights campaigner whose story is fictionalized in this novel. Sarah's progress from plantation owner's daughter to abolitionist is told in tandem with that of Handful Grimke, based very loosely on the slave girl Sarah was given for her eleventh birthday. Kidd does a worthy job of  bringing to life Southern women whose stories deserve telling - slaves and the free women who risked both social standing and their personal safety to confront the status quo. Personally, I thought this novel was more mature than The Secret Life of Bees. 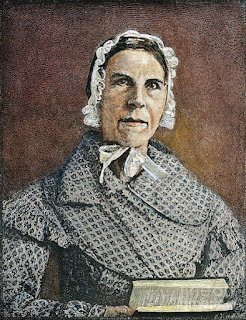 Dorothy L. Sayers - Clouds of Witness and Unnatural Death
I wasn't overly taken with the first Lord Peter Wimsey novel, Whose Body?, but I returned to the series, and really got into the second one, maybe because the cast was now familiar. After that, I went straight on and read the third. Sayers' gentleman sleuth solves two rather different mysteries in these novels. In the first, his brother is accused of shooting his sister's fiance; in the second, a chance meeting with a young doctor leads to his attempt to uncover the 'perfect' crime. (Sensitive readers be warned, Unnatural Death uses the N-word several times.)

Wishing American readers a Happy Thanksgiving (that's the American holiday I loved best when I lived there), and happy reading to all.
No comments:

Lipica: All the pretty horses

Posting has been sporadic, because the bulk of our 'adventures' this year have been in the realm of buying/selling/renovating houses, and when I've had the odd day out, I wanted to just enjoy time off rather than be in potential blog post mode (that requires me to think about photos, which I'm not good at). But - we got our first guests - my parents! The predicted week of rain happily (mostly) dissipated, and we discovered that "everything shuts for the holidays" actually doesn't include major tourist attractions, which meant we could peg Reformation Day (October 31) to finally visit the Lipica stud farm, which I've been intending to do since we first lived here 11 years ago.


Our first excitement was blithely following the satnav, which decided the quickest route involved a dog leg through a corner of Italy. Since not everyone in the car had documents with them, we held our breath that we didn't get stopped at the border. This is called living on the edge (of the country).

A short, police-free, while later, we reached the beginning of picture-perfect pastures: thick green grass, shade trees, white fences - and, tantalisingly further from the road, a few white horses. Yes, several of the adults among us were pretty excited. A free guided tour was about to start when we entered the farm proper. I hadn't planned for us to take one, but we are glad we did. We shared the English-language tour with only one other British couple, and our guide, Katya, was clear, informative, and obviously deeply committed to her work at the farm. I soon learned all sorts of horsey things I had never bothered to think about, such as that dressage originated as a way of training horses to be extremely responsive to their riders in order to aid them in battle (I just thought it was dancing with horses). So, without trying to bore you, here is some of my newly-acquired wisdom. 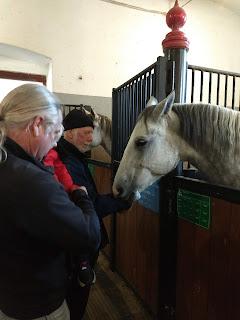 First, a potted history - the website has tons more fascinating information, these are just my random favourite bits. Lipica is the oldest continually operating stud farm in Europe, dating from the 16th century. The area used to be the summer residence of the Archbishop of Trieste, and was named after the linden tree (sometimes called a lime tree) growing in his courtyard, so Lipizzaner horses are, I suppose, something like "linden horses". (There used to be a road leading out of the residence straight to Trieste. Very convenient for His Grace.) The farm was established by the Hapsburgs, Archduke Charles to be exact, in the 1580s. Lipizzaner horses were originally bred by crossing the tough native horses with Spanish horses. Four of the breeding lines of today's horses are descended from those established in the 18th century by the husband of the Empress Maria Theresa. (The more famous riding school in Vienna now has its own stud farm, but its horses are descended from here in Slovenia.) 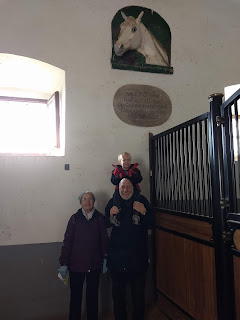 The stud farm and herd have endured some harsh times, fleeing for safety during the Napoleonic wars, evacuated by train during World War I, kidnapped by Germans in World War II, and saved in a military operation by General Patton in 1945. It survived the ups and downs of post-war eastern Europe by the skin of its teeth until, in 1996, it became a public institution of the Republic of Slovenia. The whole area is now a region of special protection. Sounds like the stuff of movies - and apparently there is one, produced by Disney way back in 1963: Miracle of the White Stallions.

But back to the horses. First, did you know that white horses aren't born white? I mean, all you horsey people probably did (and yes, I know they aren't technically white, but bear with me, it's easier). They get paler with age  - a few stay dark. Whatever their colour, it sounds like they have a fun life here. The foals get to spend six months playing out in the extensive pastures with their mothers, then they are separated for training, the most important part of which, I gather, is bonding the horses to humans. 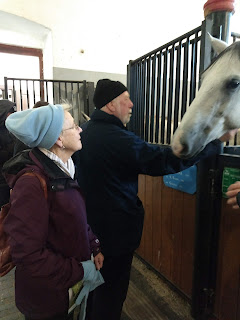 We got to visit the stables, where the horses have their pedigrees and names on display at their stalls. Brothers and sisters were stabled side-by-side. Horses arriving back from exercise greeted their friends, and were greeted back. ("They all know each other," our guide said.) Even if we hadn't seen the affection between the horses and our guide, you could tell how well loved they were by how friendly they were to we strangers. Even Alcuin petted them, and he's usually a little nervous around horses, being as they are about fifty times bigger than he is.

From there, we went to the older part of the farm, where, after giving us a final dose of history (see above), our guide left us in the original stables to explore the environs. From there we visited the chapel of Saint Anthony, and the museum, where we got as close to horse riding as we dared. And the shop, where my mother got a cup to pair with her one from the Spanish riding school in Vienna. There were a few other sights around the farm that we didn't get to see  - it was getting colder, and we wanted a good seat (and some shelter) at the arena for the show. 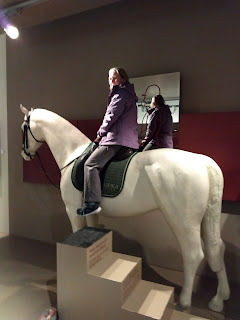 The show was themed, "The Story of Lipica", and began with horses running riderless around the ring to symbolise the beginnings of their relationship with humans, then went on to illustrate the bonds that have grown between them with training, dressage, and carriage riding. I think those horses can dance better than I can.

Afterwards, I asked Alcuin which bit of the show he liked the best. "The horses," he said. Fair enough. 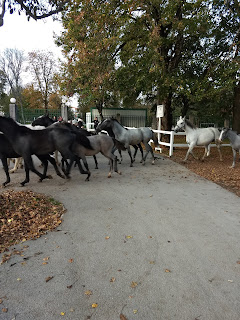 We exited the arena to find the main thoroughfare cordoned off - we were right on time to see the mares and foals galloping back from their pastures to the stable. I positioned the camera and took photos without looking through the lens, because it was too good to miss in person. Just beautiful. A perfect end to the visit. 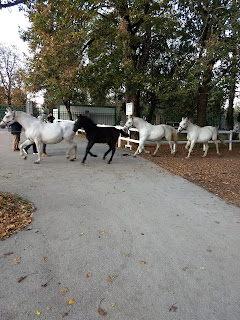 But man, once the sun went down, it got cold fast. Time to get back to balmy Koper. And we were very glad of a wonderful day out, because we got home to all sorts of traumas involving the scaffolding on and by our house (maybe that's another post!).

Touristy stuff: The Lipica website is pretty comprehensive (not always the case with Slovenian sites, I've found). At first glance, it looks a little pricey compared to other attractions in the region - 22 euros per adult in the high season, just under 20 in the winter, but that includes a free tour, access to all the grounds, and a 30-minute show (plus your car park fee back). I'd recommend taking the guided tour, and picking a day with a show if possible because it's only a few euros extra than the tour-only price (there is also an in-between option that lets you see a training session). Out of season is cheaper (but with fewer show days available) - wrap up warm against that karst wind! We did not pay extra for a carriage ride or horse riding lessons, though our guide pushed the carriage ride option. There is also a cave nearby, Vilenica, but we didn't get to include that in this visit - however, I'm sure we'll be back with more guests.
No comments: