Or, musings on a multilingual society. 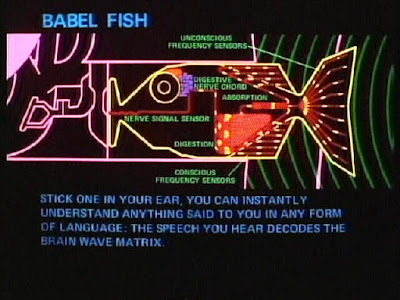 Ah, how I need one of these. Google translation services just don't quite do it. A case in point: this week I was checking on local events and came across a chocolate and wine tasting afternoon. Sounded great, but then I scrolled down to the schedule and read:
18.00-22.00  Blind tasting of tapeworms and workshops.
Mmm, a little-known slavic Easter tradition, or is Google just a teensy bit confused?

In Slovenia, you pretty much have to function with a little of several languages. According to my in-depth research (ahem, Wikipedia) Slovene is apparently spoken by two and a half million people around the world, and mangled by many others, including myself. Not very shockingly, most of those live in Slovenia - but it is not even the first language of all Slovenians (again Wikipedia puts it at about 2.1 million).*

Slovenia is a small country, and given its many borders and that fact that the Slovene people have been part of many empires across history, native second (or first) languages are common, most notably Italian and German, especially among older residents. I've seen a granddad on the playground chatting happily to his granddaughter in Slovenian, then turn to hail a passing friend in Italian. This, by the way, is apparently declining, and it's pretty obvious that English is taking its place. That might be a relief to tourists, but it's not so helpful for those of us who are struggling to learn Slovenian. It's pretty habitual that I will enter a shop, make my request in halting Slovenian, be answered in English, try to answer back in Slovenian, and be answered again in English, which just encourages me to give up.

Koper itself, where we live, is a dual language city, with Italian as the other language (it is known also by its Italian name, Capodistria). Signs and posters, even information in shop windows, is habitually in both languages. Actually, road signs also pointing to Croatia tend to be in three languages. German is also useful if you shop at Hofer (Aldi) since much of their own-brand items are labelled in German. If I'm trying to read ingredients or cooking instructions, I tend to scan whatever languages on the packet I have a vague knowledge of. This lazy option does not always work - the other night, I somehow managed to burn blancmange.


Anyhow, aside from strange culinary disasters, reawakening the language-learning part of my brain has been interesting. Two of the three languages I learned at school were dead (Latin and classical Greek), so speaking a foreign language is my weak point. Apart from a grounding in French, I have a smattering of Italian that I picked up when we were heavily into touring Italy, and I've been studying Slovenian for a while now, and I find that sometimes, when I look at signs here, I don't actually register which language it is I'm reading. Often, when I try to think something through in Slovene, it ends up in my schoolgirl French. It's like my brain is saying Hey, here's a foreign word, it's all the same. My attempts at Italian tend to peter out into French as well. My head is just a tower of Babel.

But yes, a Babel fish would simplify things. Now, please excuse me while I go get ready for my tapeworm tasting.

*It's part of a much wider family of Slavic languages, but, from our conversations, it appears that how closely they are related seems to depend on how nationalistic you are. We have been told by a Russian that it took about a month for him to learn Slovenian. Anyhow, that controversy would be a whole other blog post.

Apparently the Slovenian physicist who translated The Hitchhiker's Guide to the Galaxy (Štoparski vodnik po Galaksiji) had to come up with many inventive ways to convey Douglas Adams's ideas in Slovenian. Babel fish becomes "riba babilonika", "Babylon fish".  The infamous drink the Pan Galactic Gargle blaster becomes "pangalaktični glorez" or (roughly) "pangalactic throat-cutter". I think that's pretty interesting, and I'm not the only one because I got this information from a Slovenian academic thesis on the subject.
And Google translate told me that title means "Galactic Hockey Guide", by the way.
No comments: