1. I don't know whether this is a gender difference, but Alcuin takes everything I say much more literally, even the way I say it. I've been making an effort to talk slowly and clearly about everything he does, and the result is that he gives us a running commentary on his life in the third person, pronouncing each word as if it were its own sentence, as in, "Alc. Put. On. 'Oots. Go. Outside." But I feel I've done something worthwhile when he says, "It. Reading. Time. Mummy."

2. He doesn't quite consume my every waking hour any more. There was that magic moment when I noticed he was preoccupied with his own game, so I took my cup of coffee and sat on the sofa watching him... and actually got to finish it in peace. I'm looking forward to the happy moments when I can zone out while he quietly writes on the walls.

3. On the other hand, he consumes more of my sleeping hours, or at least sleeping space. After being the only one of our children who preferred not to co sleep, he moved into our bed, simultaneous with weaning himself practically overnight. Bed-sharing etiquette is another matter. At first, he wanted to sleep on my head, and when I told him to sleep on the pillow, he put that on my head and then lay down on me...

4. Because, as I joke, he was born two. Except sometimes it doesn't feel like a joke. We have about 0.02 seconds to meet his demands before all hell breaks loose. Thus he also gets the dubious prize of being our only child who had (has) serious tantrums, as in screaming for an hour. In between, he's the cherub he appears.

5. And I'm getting thinner. My boobs and stomach no longer exist in the same plane; my hips may not be what they were in 2014, but at least with all that planking from cheesy yoga videos, my arms are like logs. Small logs, but logs.

6. I'm totally confused as to what age I am. Sometimes I know what a teenage mother must feel like. I drive past a wine bar in the afternoon and think that could be me, sitting out with my friends, if I didn't have a baby. (Not that it actually could, as there isn't a bar within walking distance of my house.) And I admit to a little jealousy as I see women forging ahead with empty nest plans while I'm making potty training plans. But they won't have anyone at home to teach them how to use the iPhone 20.
Then again, I've learned the hard way not to use my age as an excuse after hearing a little voice chant, "Too. Old. Mummy. Too. Old." (My older, and wiser, husband, taught him to say, "Dada. Young. And. Fit.")

7.  Lastly if you're aiming for a sophisticated minimalist lifestyle, a toddler boy really helps. He'll destroy half your stuff, and you'll be so sick of continually tidying up the other half, you'll throw that away too. It's a wonder our furnishings aren't down to two balls and a pile of sticks.

And I'm calling this one: St. Elizabeth with St. John the Baptist 2017 because St John is one of his middle names (you need more than one if you're going to marry Princess Charlotte) and because Elizabeth was old when she had him. 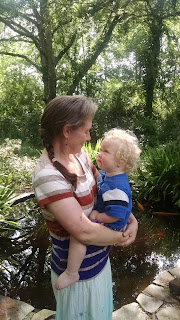 For more takes with better parenting, hop on over to Kelly's at This Ain't the Lyceum.

7 Quick Takes 55: My Family and Other Animals

Yes, I totally stole the title from Gerald Durrell - apologetic book review below. A bestiary of takes from our beast-ful house. 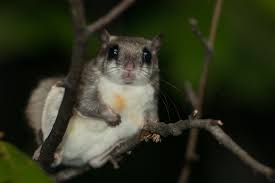 Because, yes, that is the sort of life I lead with cats who have a catch and release hunting program. (The jury is out on whether this is better than their "Partially eat it and leave guts on the rug" program.) FYI, flying squirrels are experts at scaling almost any surface to try to escape. And that includes you. The above-mentioned culprit ran up and over me about three times while I was chasing it around the bedroom.

2. My husband happened to make a joke about a recipe calling for lizard tongues. I pointed out that we have lizard tongues - we just have to catch the two enormous lizards living under our fridge, courtesy of Odie, our male cat. And I'd like to take the opportunity to point out again that throwing out a wriggling lizard tail is still gross. I did eventually catch one of the pair, but it took a little courage to grab it because it was really big. I mean, not komodo dragon big, but big enough that I thought it could bite me pretty badly - and it tried. That thing felt like a living muscle.

3. And what says Easter like a bunny - or two? Maundy Thursday, Hecate brought in a baby bunny that we eventually cornered in a closet. And another one a week later. At least bunnies don't jump on my head or want to eat me. I'm not sure how she gets them through the cat door.

4. To get away from cats (which is what half the fauna in our yard wish they could do), let's turn to this: 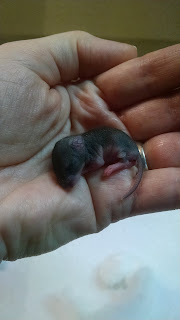 My teenage daughter found this baby mouse in the yard. And yes, I know she should have left it there to see if the mother came for it, but it was too late once she'd brought it in - and I expect it was dropped there by a cat anyway. We spent several days feeding it formula with a dropper; my daughter even set her alarm for 3am every night for a feeding. But, just as it seemed like the little mouse was going to make it, it passed away. A mix of sadness and relief there.

5. I've had Ameraucana hens for eight years, and I thought they were all blue/green egg layers, until I caught one in the act last week - laying a pink egg. I'd thought those belonged to one of my Buff Orpingtons. It's never too late to learn something about your chickens.

6. Talking of poultry, I was out in the yard with the toddler this week, watching a duck bounce comically across the grass after a butterfly. "Look at that silly duck!" I said. Then she caught it.
From the look on Alcuin's face, that's one more item he'll be discussing with his therapist in twenty years' time.

7. But if you REALLY want hilarious insanity that features all creatures great and small, I recommend My Family and Other Animals by British naturalist Gerald Durrell (published 1956). It's a memoir of the years his widowed mother took the family to live in Corfu in the 1930s (apparently cheaper than staying in England). I first read it in school - and have read it more than once since. It's one of a handful of books that make me laugh out loud. You will especially like it if you're an Anglophile and fan of eccentric British folk. 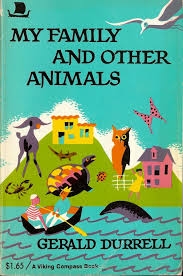 Fun fact: my brother auditioned for the part of the young Gerald Durrell in the BBC TV series when he was about 10. My parents said it was because he loved animals, but I think it was because my mother wanted a holiday in Corfu. Maybe if he'd got the part, my middle-aged friends would now be posting photos of him on FB instead of that Poldark guy.

For other links, hop or fly on over to Kelly's at This Ain't the Lyceum.
No comments: