1. In the interests of truth, I begin with apologies to J.G. Ballard for shamelessly hijacking his sci fi short story title, "Time of Passage". My plagiarism was inspired by the fact that I'm living on two time planes right now - real life and Seven Quick Takes life, which is several weeks behind after taking time out to go to Boston and Cambridge (I'm getting good at not conflating the two places into Boston). Hence the random news in attempt to catch up.

2. After getting back from his gourmet breakfasts at the Bed and Breakfast in Cambridge (which for him meant as much cheese as he could get away with eating), the baby tried going on hunger strike when faced with the usual boring oat cereal and scrambled eggs. This consists of turning his head away and laying his face down on the high chair tray so there is no way anyone can sneak that evil, poisonous food into his mouth.

3. In sympathy with the baby, my students apparently went on study strike while I was gone. Foolishly, I gave them an extra week for their research essays and class prep instead of demanding they hand it in before I leave. The result was that almost no one managed to turn in an essay that met the minimum page requirement, and no one at all had read the assigned stories. How did I find out? I asked a simple reading comprehension question about Eudora Welty's "A Worn Path" and no one could answer.

4. My husband regularly reads the blog to find out what he's up to, in his words. After the previous entry he announced, "You make our family sound freakish." Freakish? Coming from a mathematician? A pure mathematician at that? All I can say is, pots and kettles...

5. Whether or not we're freakish, there's certainly evidence that we're reclusive. Packing for the holiday, I realized that the baby only had two pairs of decent trousers.  Plenty to see us between washes. Otherwise, he spends his time at home in baggy, stained sweatpants so he can a) wear cloth diapers (most baby clothes are made to fit disposables) and b)  I don't have to worry about his his clothes while he climbs in the dishwasher/ eats cat food/ chews computer cords.
And hey, the semester is nearly over, so I can enjoy getting out even less.

And to finish up with two totally unrelated points...

6. In the midst of all our insanity, an interlibrary loan arrived, but I was too busy to read it. The title? Breaking Busy: how to find peace and purpose in a world of crazy.

7. We've been working on getting our middle daughter to curb her snarkiness, but it's hard when it's in your DNA. For example, so many people have been remarking how the baby looks just like his sister that I'm starting to have to fight the urge to reply sweetly, "Yes. Except for the penis."

Looking for more snark? Visit the other link ups at This Ain't the Lyceum.

1. I was going to start off this post by proclaiming that sometimes we actually do normal activities, like a normal family. As in going on holiday (why do we holiday if we're British, but vacation if we're American?). Well, we did manage a holiday - all the way up north to Boston and Cambridge to visit our eldest. This was my first trip to MIT, since my previous plans to see said child off to college were derailed when she had her appendix out two days before she was supposed to leave back in September.

2. We opted for a Bed and Breakfast (OK, I whined about not staying in a chain hotel and my husband delivered). Harding House is a historic house situated in between Harvard and MIT. It's this pretty, bright blue house standing among, ahem, not quite such pretty (i.e. grungy) buildings. And opposite a building site. But I enjoy the eclecticism of Boston neighbourhoods, so I can't complain too much. Plus, there was unlimited coffee cake and Hersey's kisses.

As Boston is in a different time zone, I had hopes of getting to sleep in an 'hour' later since the baby would be on his normal clock. Instead, he woke up an hour earlier, due to it being so much lighter up north. Consequently, we got all got up at the equivalent of 5am the first day. OK, he did make it back to sleep at 7am (Boston time, are you keeping up?), but then building work started across the road. With hammers. As my husband said, who uses hammers nowadays? Not any contractor down in Mississippi. People in unions, that's who. Five minutes with a nail gun, and we could have got a nice pre-breakfast nap.

3. The first day, we went on a historic tour of Harvard. This turned out to be led by a British student, who spoke so fast and low that even I had trouble understanding her. I spent most of the tour either straining to hear her or conquering my urge to ask her to use better enunciation. She also led our group hither and thither up and down steps with apparently no heed to the fact that we had a stroller. By the time we had finished (half) hearing about her "challenging" social sciences degree, we were glad we sent our daughter to MIT instead. Sorry, Harvard parents - I'm sure you feel the same about MIT.

4. The end of every tour stops at the statue of John Harvard, who isn't John Harvard at all, because there was no extant likeness of him when they made the statue. Apparently it's a tradition that you rub his foot for luck. So we duly took a photo with the baby. 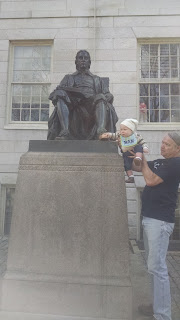 That evening, we met our daughter for dinner and told her about the tour. "Oh," she said, "Harvard students pee on that statue all the time."

That night, the baby came down with his first cold. This meant he woke up about once an hour every night for the rest of the trip. Coupled with my husband's snoring, the building site, and the stuffy top-floor room (which was otherwise lovely, in case I sound like too much of a complainer), this left us with severe sleep deprivation. I'm wondering if I should sue Harvard for the cost of our vacation. However, since they are the first group to ever successfully sue the American government (for damage caused by troops in the Civil War), I'm not sure how far we'd get.

5. People in Boston are aggressively helpful. By this, I don't mean that they are nasty, but that they insist on not just telling you what to do or where to go, but taking you by the arm and leading you there. We had to let the lady at the subway talk us through getting our tickets, even though we knew exactly what to do  - but then she did save us money by telling us to pretend our twelve-year-old was eleven, and to all squeeze through the barrier on one ticket because who cares?

6. We finally made it to the Isabella Stewart Gardner Museum - as in, it was on my list when we first visited Boston about five years ago. It turned out it was on everyone else's list that day, too. We had to wait in the rain for the lobby to get in, and then two hours before a table was free at the restaurant. But it was worth it. The house is built in the style of a Venetian palace, around a beautiful courtyard. Isabella Gardner was a pretty savvy art collector, and managed to acquire paintings by Titian, Rubens, Raphael, John Singer Sargent, and Whistler, among others. She stipulated that everything had to be left as she arranged it. There are even blank frames from a heist many years ago. Oh, and people named Isabella get in free.

7. We woke up to a snow storm on the day we were supposed to leave. I tried to take pretty pictures, but the wind was too bad. Our plane was delayed, not ironically by the snow but mechanical error. In the end, my husband was stranded in Boston for another night while the rest of us got rescheduled.

Verdict? We ended up exhausted, but I'm glad we went. I think we're going to try Airbnb next time, though (and remember to take family photos). Maybe we'll get to stay in some Harvard law professor's house. I wonder what we can pee on in revenge....? (If any Harvard law professors are reading, that was a joke. Don't sue me.)

For Seven Quick Takes less imbued with thoughts of revenge than an Edgar Allen Poe story, visit Kelly at This Ain't the Lyceum.
No comments: