1. Whenever I haven't blogged for a few weeks, I always want to begin with an excuse that somehow assures you of my good intentions. Well, actually, I'm not sure I had good intentions this time. I had a series of posts in mind on a  "grumpy geriatric mother" theme because I thought it wasn't worth competing with the Advent posts of most other bloggers. But I was on the cusp of writing it when liturgical guilt assailed me. Surely I should pretend not to be grumpy in the season of goodwill?

2. But that's hard, because I just got through finals week, and I had to finish up the semester when I was exhausted and through with it three weeks ago.  I get to spend these last few days fending off desperate emails. No, I'm not offering you extra credit. Maybe you should have come to class instead. While you were at it, you could have read the syllabus. Oh, and maybe given in your assignments on time. Heck, it's Christmas, let's just say at all.

3. Considering that we have a new baby after  a twelve year gap, I think we've done pretty well in terms of preparing for and keeping Advent. It helped that we holed up at home for Thanksgiving week rather than drive to see relatives (when the baby is fed up with being in the car, he screams until we stop, so we knew we wouldn't survive a 500-mile trip).

4. I have all the Advent decorations up. The fact that the house is still strewn with the piles of the pictures etc. I took down to make way for them is only a minor defeat. My daughter made a wreath (under orders). She piled the greenery so high that we are going to set it on fire before Christmas. We even lit the first candle on the first Sunday of Advent! Second Sunday became Second Tuesday - but in our defense, we had Lessons and Carols on the Sunday evening and my daughter was out of town.

5. We celebrated Saint Nicholas' Day - a day late, because it fell on Sunday and see above. Thanks in large part to the new SuperKroger in town that has an olive bar where I could get vaguely middle Eastern food, and buy horrendously expensive baklava. I think we got through the Saint Nicholas prayer before the baby started screaming for his dinner, but I can't remember - most days are a blur.

6. Advent calendar?  All I can say is, if your mother gives you some cute fabric calendar with pockets  that you have to remember to fill every night after the children are in bed, leave it near the over-full Advent wreath. In eighteen years, I have never made it through one Advent without forgetting multiple times, which is pretty traumatic for young children intent on their 6.30 am chocolate fix.
This year, since my daughter who is still at home is twelve, and the baby too young, I suggested she just let me just stuff it in advance, but she told me she wouldn't have the willpower to resist. I tried putting in Dec 4, 5 and 6. When I turned around, 4 and 5 were gone. I suppose she was honest. 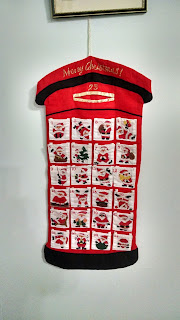 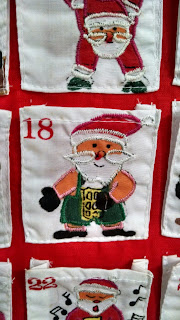 Two things that show you this is a British calendar: it's a post box, and one of the pockets depicts Father Christmas drinking beer. Oh, and a disclaimer should my mother read this: the girls love it and are fighting over who inherits it.


7. Tree? Nope. We will get round to cutting one down close to Christmas. That makes us lazier greener and holier than you.

For more Quick Takes, join Kelly at This Ain't the Lyceum.
1 comment: