1. Yes, yes,  I know you've got plans to read lofty books this year. You're currently in a bidding war on ebay with an Orthodox seminarian for the complete works of St. Augustine in Latin. You're just hoping it's Pig Latin. But Lent doesn't begin until March, so it's time for my second annual January round-up of books you can buy with your Amazon gift card, which just happen to be written by talented friends of mine who still let me hang out in their online critique group, even though I haven't attempted a novel for two years. All are easy reading - but after all that work keeping the family happy over Christmas, you deserve it.

Sexual content. Ho hum. One person's mild curry is another person's too spicy. So, I'm giving my personal opinion. If it helps, I'm bored by sex scenes that are only there because hey, it's time for a sex scene. On the other hand, I don't mind more graphic sex or violence if justified by the context. I guess that didn't help, but it's my disclaimer.

2. A Savage Exile: Vampires with Napoleon on Saint Helena by Diane Scott Parkinson
"Napoleon and vampires?  I really shouldn't, but it sounds so tempting..." Yes, I can hear you thinking ;)  Diane has written a couple of parodies, and I think her lighthearted side shows through in the paranormal part of the novel. This is scary light, a story to enjoy, not keep you awake at night. Or, you could read it for the sensitive and poignant portrait of Napoleon's small court in exile on Saint Helena. Sexual content: mild to medium. It has sex outside marriage, but does that count with an abhuman? Maybe Saint Augustine has something to say about that, because he has something to say about almost everything. So you know you'll find the answer during Lent. Which is your excuse to go ahead and read this first.

I've said this before, but it was maybe a year ago, so I'll say it again: I don't read any mainstream romance except for Maggi's books. The sexual content in general is mild to medium, usually after marriage, and most also have an element of thriller or mystery as a subplot. This is the fifth and final installment in the Baxendale Sisters novellas, and they feel like old friends to me by now. Lady Mercy is in her first Season, and her parents expect her to make a good marriage, but she wants the right man, not the richest. However, an accidental scandal means she must get engaged to the distant Viscount Northcliffe. Can she escape a wedding, or should she try to find love in a marriage of convenience? A short, put-your-feet-up-with-a-cup-of-tea-and-indulge-yourself read.

I've probably also said this before, but I admire Rosemary. She spent decades trying to break into publishing, and was about to throw in the towel when her novels were picked up. Now she has a career as a novelist in her 'retirement'. Inspiration never to give up. Her books would be classed as "sweet romance", with the bedroom door always firmly closed. I think this Days of the Week series has grown stronger book by book. Tuesday's child is Harriet Stanton, a penniless young widow with a son, who has been reluctantly taken in by her father-in-law, the Earl of Pennington. However, the old man soon has plans to take control of her son's upbringing. In her fight to save her son, she discovers an ally in the Reverend Dominic Markham, but soon realises she is also battling her loyalty to her dead husband as her feelings for Dominic grow.

5. Flora's Secret by Anita Davison
"Deja vu all over again" as my husband says. I reviewed this novel under its original title of Murder on the Minneapolis. At the time, I mentioned that the publishing company had been sold to a firm that didn't have a big fiction list. Thankfully, this series got a deserved reprieve with another publisher. I mean, who doesn't want to read about a couple named Flora and Bunny? I'm running out of time writing this, and so I'm cheating with a cut and paste of my original review:

Governess Flora MacGuire boards the SS Minneapolis with her young charge, Viscount Trent (Eddie), bound for England. Soon, she finds a body on deck. Despite the evidence she has seen otherwise, the incident is declared an accident. But another murder soon follows. Are Flora and Eddie in danger because of her involvement? And what of the budding shipboard romance between Flora and the upper class Bunny Harrington: surely the class divide will be too strong once they reach the shores of England?
This is a deftly written, classic, cosy whodunnit, with a large net of characters hiding secrets and probable motives, unexpected twists, plus a charming romance.

6. Erasmus T. Muddiman: A Tale of Publick Disptemper by Katherine Pym
In full disclosure, I've read part of this novel in the drafting stage, but not yet the final printed copy. However, from what I saw, Katherine employs her usual skills with dialect and detail to thrust you into the heart of seventeenth century London. This is part of a series set in the 1660s, leading up to the Great Fire of 1666, and the spectre of the flames hovers through the books. In this novel, we are up to 1665, seeing the city and war through the eyes of eleven-year-old Erasmus as plague and pressgangs close in to threaten the survival of his family and those around him. Although the protagonist is a young adult, it makes an enjoyable adult read, too.

7. Lastly, since I try to be honest in my book reviews, I want to mention that several of these (Tuesday's Child, Savage Exile, Erasmus) are published by Books We Love, a mainly e-publisher which takes on only previously published authors. The plus side to this is that they have a lot of very talented writers on their books who, in the great publishing lottery of life, weren't picked up by larger publishers, or whose relationship with a bigger publishing house has ended. The minus is that the covers aren't always the best, and the number of typos can be irritating (to be fair, errors for ebooks are slightly higher in general, and usually quickly spotted and corrected). So please don't judge their books by either :)

Lastly lastly, Amazon keeps changing its review policy, which is pretty hard on self-published authors, or those who hover at or below mid-list. Currently, books get on a "recommended reads" list with twelve or more reviews. So, if you like a book you read, please help the author with a quick review. I usually just pen a few lines - no need for a paraphrase of the plot - but it can make a big difference.

On your way to Amazon, don't forget to check in with Kelly at This Ain't the Lyceum for more quick takes
No comments:

1. What do "Britain's stingiest woman" and an atheist 70s vintage junkie have in common with many writers in the C/catholic blogosphere? Answer: They've all been discussing cutting back on - or ignoring - Christmas altogether. Maybe it's just that I veer towards nonconformists, but it seems to me that more and more people are not just moaning about the commercialization of the season, but actually taking action about it.

My name is Susan, and I'm a recovering Christmasaholic.

2. Life in thrall to Christmas was tough. Beginning in November, I would hand write letters to add to dozens of cards. I made my husband risk life and limb - and use up his swearing quota for the year - cutting down and setting up the perfect tree. I hoarded Christmas paraphernalia, fearing the Yuletide equivalent of the zombie apocalypse. I proclaimed such a fervent belief in Father Christmas that my (post belief) daughters had to sit me down and explain how I traumatized them. I even once constructed a 10-foot swag of magnolia leaves, sprayed gold and pieced together one by one.

How did my reformation happen? Not my girls' intervention; I still believe in Father Christmas. No funny or momentous revelation, either. Just being overwhelmed, gradually coming to my senses - oh, and still being swept up on the tide of KonMari fervour :)

3. The slow demise of the Christmas card is a topic that really got me thinking. We used to cover three surfaces with all the cards we received. In the past couple of years, that's gone down to one. Probably most some of those people have struck us from their list, but many more are choosing to post a photo of their kids/dog/python under the tree on Facebook, wishing everyone Merry Christmas, and being done with it.

And I'm getting there. I've gradually scaled down from those letters to hand written notes in cards, plain cards, then photo cards with printed names, and this year's 7QT Christmas letter. My husband is trying to persuade me to give up sending cards altogether, but that's easy for him to say because he hasn't personally sent one in twenty years.

4. I didn't even put up all the decorations this year. We had a Saturnalia party for my daughter on the 17th, and festooned the entrance way with a banner and roman columns - and I just liked it too much to take it down straight away. After all, Saturnalia goes on for nine days, and I wouldn't want to offend Saturn. And when I finally did, I couldn't be bothered to mess with climbing on a ladder clutching handfuls of drawing pins (thumb tacks) to put up my Victorian Christmas friezes.


5. This year, I'm also finishing the purge of my nutcracker ornaments. I had several, mostly gifts, that I dutifully displayed or hung on the tree because they're a Christmas icon, but the truth is I find them creepy. So they've gone off to the thrift store to give someone else nightmares.


6. The tree. We used to have a Christmas tree farm within walking distance of our house, and the girls and I enjoyed choosing and tagging a tree after Thanksgiving, then going back at the last possible moment to cut it (but not my husband - see above). Then the farm closed, and the nearest is thirty miles away and erratic in its opening times. In a zero waste fit, we started cutting down trees in our yard, which weren't always the prettiest, but the price was right. My brother tagged them "frankentrees". But after a sustained drought this year, we weren't even going to get to frankentree standard. Then a friend told us that the local DIY store were selling half price trees. I'd never bothered to try bargain hunting. From what I remembered, if you touched one of those trees with your little finger, all the needles would drop off. But genetic engineering has come a long way - those needles don't budge, even when the tree is dry as tinder. I ended up with a seven-foot Douglas fir for $20. Granted, it was rejected by everyone else in town, but after years of 'natural' trees, it looked top notch to us, and anyway, I'm an expert at hanging ornaments to fill and disguise gaps.

7. A recovering or frugal Christmas isn't complete without making do. I had a couple of fake taxidermy crows (half price, of course) that I'd got from a craft store for Halloween. I couldn't bear to banish them for Christmas, so I put some dollar store tinsel around their necks and hey-ho, Christmas crows (that was the thirteenth day of Christmas, of course). And one of them looks pretty good on the second tree. Yes, I said second. I have a tabletop tree to display my special ornaments, because I'm recovering, not recovered. 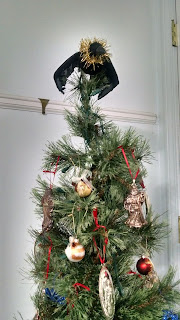 For more quick takes, fa-la-la-la-la over to Kelly's link up at This Ain't the Lyceum.
2 comments: