Linking up with Modern Mrs Darcy as usual for QuickLit. Quite a lot happened this month: carnival, school closures, spousal travel, coronavirus arriving next door in Italy, but I still squeezed in four books. And a craft! I decided months ago that what our alcove needed was a book wreath - and I finally forgot chores one weekend and pulled it together. The hardest part was tearing that first page out of the book (The Du Mauriers by Daphne Du Maurier, if you are wondering). 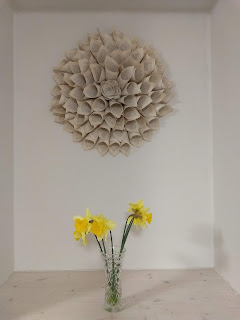 B.B. The Little Grey Men
I picked this up in a second-hand bookshop because I remembered enjoying works by B.B. as a child, though I couldn't remember anything specific about the stories. It been sitting on my shelf waiting for my son to be old enough to have it read to him... but then I was on sick leave and looking for something to read, and I thought, why am I holding off?
And I am so glad I opened it. I was entranced from the beginning. This is the story of the last gnomes in England, who decide to go on an expedition upriver to seek their brother who left the year before to look for its source and never returned. The story is riveting and the nature writing exquisite. If you loved The Wind in the Willows, or Tolkien's Middle Earth, you will probably love this too. B.B.(real name Denys Watkins-Pitchford) describes it as a book for all ages, and I agree. (One small warning if you have sensitive children - this is a story of the natural world, so death is part of life here, including a sadistic human who comes to a bad end.) If you didn't believe in gnomes before you read it (why?), you will by the end.
Now to start scouring bookshops for more B.B. ...


Rosemary Morris - Friday's Child
Rosemary Morris is a member of my online critique group, and I always think of her as an example of not giving up on your dreams - because that was what she was about to do when, at retirement age, her first romance was finally published. This is the penultimate in a series of loosely linked Regency romances - light reading, and all with firmly closed bedroom doors. It is Lady Elizabeth's coming out, but she has already fallen for Mr Yates. However, a chance accident links her to her eldest brother's older friend, who finds himself attracted to her - and both men have a connection with India that one of them at least is keen to hide... If you like this, you've got five more to binge, with the last one in progress!


Dorothy L. Sayers - The Nine Tailors
After crashing their car on a treacherous New Year's Eve in the Fens, Lord Peter Wimsey and Bunter are taken in by the local vicar, and Lord Peter helps the bellringers ring in the new year. But when a strange and mutilated body is later discovered buried in another's grave, the vicar calls him back to investigate. I'd call this a mystery for grown-ups - complex and satisfying, and kept me guessing as to the exact details of the crime. However, hearing the local cathedral bells has now taken on a whole new meaning...

Alan Bradley - I am Half-Sick of Shadows (Flavia de Luce mysteries Book 4)
A film crew arrives at the crumbling de Luce mansion just before Christmas, but soon the leading lady is dead and half the village is snowed in with the body. Many readers seem to love this series featuring a precocious 11 year-old chemist, but, although it was entertaining, it didn't really draw me in. Perhaps that was because I read it on the heels of Sayers's adult mystery, or that I started mid-series (I also didn't get into the Lord Peter mysteries until the second).  So, to be fair, I would give another one a go.

At the moment of publishing, I'm with family in the UK, wondering if my flight back to Slovenia tomorrow will be cancelled, and I'll be stuck here at the seaside surrounded by tearooms and second hand bookshops :)