A taste of the east: Maribor, Ptuj, Pohorje

Thank goodness we got organised enough to book a short break for January - because 4/5 of us were laid low with the flu over Christmas. We went back and forth on the choice of vacation: snow would be fun, but we didn't want to end up stuck in a cabin in some remote village in pouring rain, so maybe a city break was more sensible - but snow would still be fun...  We ended up picking the Maribor - Ptuj area where we could get a city break and were near to a ski resort (Maribor is Slovenia's second-largest city).

(This review is a slightly conflated version, because we bounced back and forth between the various locations.) 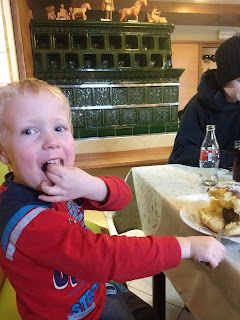 First excitement was taking the advice of a Slovenian friend and stopping at Trojane for lunch on the way. It's famous for its krofi, the Slovenian version of doughnuts. Undaunted by the reviewer complaint on Google that the doughnuts were "too big", we stopped at the bakery's gostilna, which is pretty much like an American diner. Ted and I chose the lunch menu, because how much food could you get for around 11 euros? Turns out, about enough for a hippo. Guess I should get on Google and complain about that. Soup, salad, bread, an enormous dinner plate, and dessert: not fancy, but good, plain, home cooking. Alcuin cut to the chase and ordered a chocolate iced, vanilla cream-stuffed krof (singular for krofi) about as big as his face (but tucked into my food as well). We had to give up and take dessert to go (plus extra krofi). To be honest, krofi are not quite to my taste, but other family members like them. 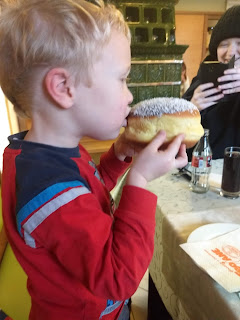 Second excitement was finding the AirBnb apartment in the dark (after perusing Maribor). We made it easily to what we thought was the village (Slovenja vas) and started looking for the road - except Every. Single. Street off the main road was named Slovenja vas. A phone call brought our kind hosts to our rescue, who jumped into their car and led us to the right place.

In the light of day, the explanation was clear: Slovenja vas is the equivalent of a housing estate/subdivision, with homes on small numbered roads leading off the one main road. Oh, and also, there was a clear sign at the turn for the apartment.

In the morning, fuelled with a big breakfast, we grabbed many layers of clothing and set out for Pohorje. Our eldest had been enthusiastically touting a "family ski holiday" for months. I, on the other hand, had visions of getting cold and wet in our amateur snow clothing and a broken leg at the end. We managed to beat her down to sledding for a first trip. So, on to the hire shop, where a very nice young man explained the options, rented us a very cheap sled to go with the plastic kiddie sled we had bought our son, and sent us forth. 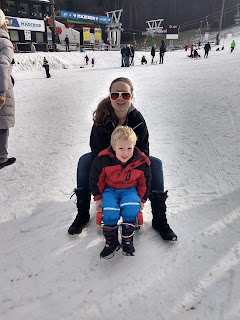 There has actually been very little snow in Pohorje for two years, but they are maintaining slopes with snow machines. It's pretty weird to look up the mountain and see one long strip of snow punctuating the green. Also weirdly, I was the only one with actual sledding experience, albeit I hadn't been on a sled for 35 years, you know, back when there were real winters in England, and you walked to school in three feet of snow, uphill both ways.

I have to say I did pretty well for a middle-aged lady, and I was even having - gasp - fun. Ted, on the other hand, decided that his shoes weren't up to the slippery slope and just watched all the small children happily wiping out. After a little hesitation, Alcuin got really into it. All was going well until one time I was walking back up the slope, and some lady with a toddler went out of control on the ice generated by the snow machine. She hit me so fast I didn't even know what had happened until I face planted in the packed snow. Ow, that hurt. A lot. Thank goodness, there was plenty of snow and ice on hand to put on my face. And, I even went down the slope again. Shock, I suppose. Strangely, this did not make Ted change his mind and try sledding.

On the way back to the car, we asked Alcuin if sledding was fun. "It was SUPER fun!" he cried. 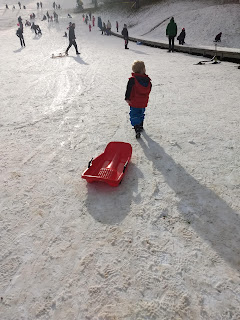 So, score for Pohorje. Ptuj, in the afternoon, was not such an immediate hit. But it did confirm what we discovered on our last early January outing, namely that everything but main tourist attractions tend to shut down after Christmas. We'd planned a little classical excitement, visiting a temple to Mithras and locating Roman monuments in Ptuj, but the shrine was closed (and enclosed so we couldn't even walk around it), and the monument was covered up for the winter. But the tourist office was open so we went in and asked what we could do. The guide suggested the castle. We'd originally dismissed the idea given our experience of cold, empty, small-town castles, but it turned out that Ptuj is an exception, and that the castle is also the museum, housing some important collections for Slovenia. It was also an easy walk up from town - so much easier than our usual hair-raising drives up tiny, cobbled hills.

Since this was our last-minute option, we didn't do the place justice in the short time we had before it closed, plus it isn't really full of things to keep children interested. At least, not compared to a morning of sledding. (Our retrospective opinion was that we should have gone to the thermal baths for the afternoon and saved the castle for another time, but live and learn.)

The museum includes a colourful exhibition of carnival costumes, with lots of information about the various Lenten/spring time traditions and parades. Ptuj is famous for its Korants, men dressed up in weird and somewhat scary masks representing demons who chase away the winter and dispense good luck or curses around villages, according to their reception. They certainly scared Alcuin, so maybe my plan to return for carnival time this year is on hold. Other collections include Roman artifacts, the armoury, and a national instrument collection (that we didn't get to but should have), which contains one of the oldest instruments found in Slovenia, a rare Roman flute. 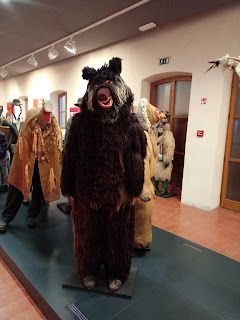 We'd scouted out Maribor on our arrival, but went back with intent on our last morning. Intent specifically being a wine tasting at the Old Vine House, hot on the success of our olive oil tasting. Said house shelters the official world's oldest grape vine (around 400 years), growing against the wall outside. We didn't get to taste that wine, of course - you can only get your hands on a small bottle if you happen to be a visiting pope or president. But we did get to taste several regional wines, guided by a young, enthusiastic, and very well-informed host. We decided we would not be appreciative enough to shell out for a tasting of top wines, so we chose the middle package - four set wines and one of our choice, for under 8 euros a head, which I think is pretty good value. We also learned some interesting wine facts, such as the reason Slovenia mostly makes white wines is simply that it was decided by some powers-that-be that this should be its focus. Also, ice wine is so expensive here because they only make it the "proper" way, letting grapes freeze on the vine (and the right conditions haven't happened for several years), whereas lots of those Canadian ice wines are made by "cheating" and putting the grapes in the freezer. 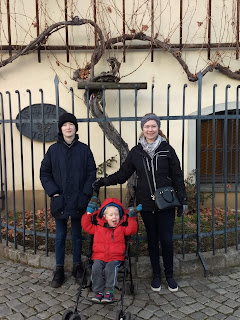 So there is our whirlwind tour. My nose still hurts a little as I write this, a week and a half later. Sneezing is... interesting. I don't think I broke it, but heck, what do my looks matter anyway at this stage of life?

Touristy stuff: So, again, the moral is that if you want to be a tourist here just after Christmas, stick to the main attractions, winter sports, or a major city break. Thermal baths are another favourite option of mine, and I'm a little sad we didn't make it to the ones near Ptuj. Ah well, another time. Websites are not always clear about whether attractions are closed, but here are a few sites: for Maribor (also covers Pohorje), the Old Vine House, Ptuj, Ptuj castle, and Trojane. Apparently there can be a long wait at the Trojane restaurant if you go at more of a tourist time. This is the site for our Airbnb. It's a holiday apartment rather than a family home. It was spotless, warm, and comfortable, and we would stay there again.
And watch where you're going when climbing a ski slope.