The village of Kubed, within the municipality of Koper, and not too far from the more famous Hrastovlje, puts on a yearly medieval festival. It runs over two days, with evening games and entertainment Friday night, and a pilgrimage-style hike of the region Saturday morning (apparently with goulash thrown in), followed by festivities on the grounds of a ruined castle fortress. With our teenager away in the UK digging up the Dorset landscape, we had no extra help with the hurricane that is our four year-old, so we had to opt for one event that looked child-friendly. We went for Saturday afternoon. 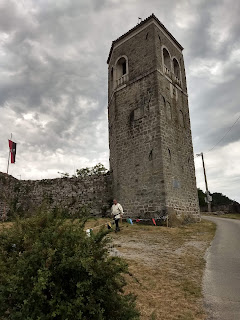 Taking a chance on the thunder showers sweeping across the region (see photo above), we set off up the ubiquitous winding roads, forearmed against the satnav inevitably missing the crucial hairpin turn. When we got to Kubed (someone was there to direct parking, hurrah), we got to wind uphill again, but on foot this time. But we were rewarded with free shots of local liqueurs - except Ted declined because he thought he'd be facing insane drivers on the mountain road home responsible. 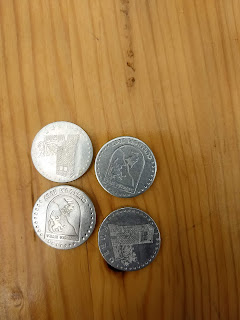 Not much was going on yet, though it was past starting time. There was a ring with assorted 'medieval' weapons for children to kill each other with. Alcuin was itching to jump in the fray, but it was mostly monopolized by older children, and he couldn't understand why it wasn't a good idea to throw himself in the middle of no-holds-barred eight year-olds. Eventually, the small(ish) kids got to take over, and he had his time in the ring. 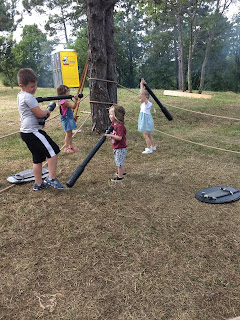 At last! Something happened: a bunch of cosplay people processed up and down the pathway. As you can see below, included in the procession were people in national costume, who proceeded to put on a little play for bystanders. From my amazing grasp of Slovene, I can tell you it was about eggs and sausages, and then they played the accordion. 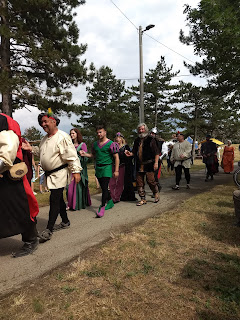 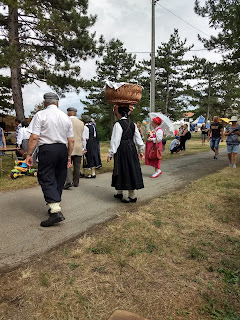 After that, it was historical reenactment time: players hung out by the armoury and practice areas, interacting with anyone who wanted, with music and dancing. And medieval drinking, which they deserved for wearing all those clothes - and armour - in the heat. One fun addition to the festival was a full-size combined trebuchet and catapult. When they felt like it, the players livened proceedings by lobbing some (non destructive) ammunition at the castle wall. 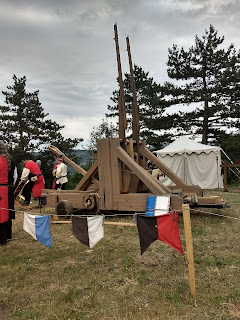 Someone rashly let Alcuin handle a bow twice as big as he is. I stood well back to take the photo. 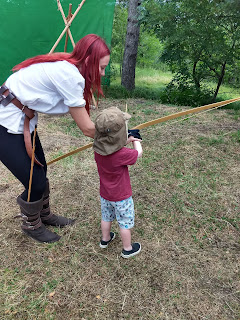 Finally, much later than advertised, and just as we were about to give up and leave, the combat began. And, after the wait, it was pretty good - professional and well scripted. But we had been there too many hours: Alcuin had reached the end of his attention span, and it was time to head off before all was over, thankful that we had missed the thunderstorms, and wiser for the next visit. 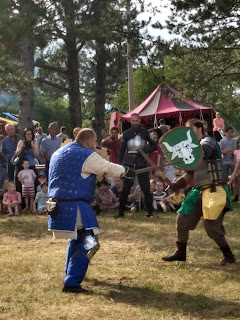 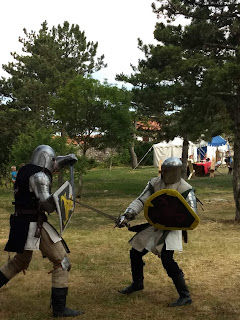 Ted pronounced that it was the sort of thing that would be more fun if you went in a group, with a designated driver (i.e. not him). I have to say that worrying trying to outrun (outdrive) the storms also made it less of a good time for him. I'd like to participate in some of the other events as well, so maybe there will be an update post coming!

Postscript. On the way to the car, Alcuin tripped on the pavement. It was a seminal moment - his first bad fall on concrete. He wasn't badly injured, but he was so traumatized he refused to walk for the next 24 hours. I had to carry him everywhere. Honestly, he is the most single-minded child we have, and that is saying something.

Touristy stuff. The festival, Medieval Days in Kubed, runs around the beginning of July. Here's a link to this year's festival (still working at time of posting), and one to a tad of history about the place. I promise, it's far from the worst mountain road we have been on. It's Slovenia, so you might want to turn up a little later than advertised - that's what the locals in the know seemed to be doing. If you are dedicated to efficient tourism (don't have small children), you might also squeeze in the famous Dance of Death fresco at nearby Hrastovlje.