Linking up with Modern Mrs Darcy as usual for quick book reviews. I said I wanted to read more mindfully this year, and I achieved that in March, with a classic that needed close reading, and a long book - then I skimmed something meh while in the throes of a bad cold.

I always cite this as my favourite book - but I haven't re-read it in years. It got to the point where I was afraid to, in case it had lost its charm. So, I took the plunge and reader, I was not disappointed. I may see it differently in mid-life than when I first read it as a teenager, but the fierce, loyal, passionate Jane, who places her integrity above all else, will always be my ideal heroine. I wrote a longer piece about re-reading it here.

Jane Eyre prompted me to another re-read. I always think of this as my gateway Modern Mrs Darcy book, as it was the first recommendation I tried from the website. I really enjoyed it the first time I read it, but following straight on from the original did not make as favourable a comparison. It's Dickensian rather than Brontëan in tone, and the parts that don't intersect with the original pulled me in to Rochester's story. However, while I understand Shoemaker's dilemma in dealing with the 'Jane' part of the story, the decision to summarise most of it in reported speech means that we lose the spark of their duelling conversation.

I'll skip the meh book for a review of the latest chapter book I read with my five (almost six) year-old. 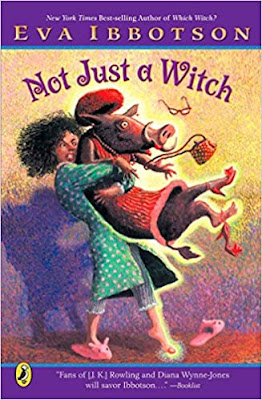 Eva Ibbotson - Not Just a Witch

Back when there was more of an outcry over Harry Potter, I'd often see US bloggers assert, "There's been nothing like this before!", when in fact, from a British point of view, Harry Potter comes from a long lineage of children's fantasy/school stories. In my opinion, the Austro-British Ibbotson is one of the finest authors in this tradition. Her books are imaginative, smart, entertaining, and down-to-earth. Heckie is an animal witch, that is, she can turn people into animals - but she is also a good witch. Following a misunderstanding with her best friend Dora, a stone witch, Heckie moves to Wellbridge, intending to Do Good by transforming wicked people. She recruits local witches and three children, particularly the lonely Daniel, ignored by his professor parents. But a local furrier, Mr Knacksap, finds out about Heckie's power and hatches a plot to deceive her into making him a fortune.

This book is probably more aimed at middle graders for independent reading. My son loved it and made me read it twice over, though I did gloss over a few comments about human cruelty that I was not sure I wanted him to think about yet. (FYI, my all-time Ibbotson favourite is Which Witch?)

Any books you have shied away from re-reading? Wishing all reviving Spring or Autumn reads this next month!