This is technically a post of two parts, months apart because of the pandemic.

To be honest, I never knew about the wetlands reserve on the edge of Koper until a neighbour sang its praises. That is, I had heard the name, but confused it with the park area around the Škocjan caves, which is in a different municipality. Ted had heard of it, but never been in all his years coming to Koper. So, confined to our municipalities by lockdown, it seemed a perfect outing.

Seemed. The first time, we walked through a sort of annex to the park, then traipsed to the main reserve to find it closed. I was flabbergasted - people can't walk safely in the open air? Then it became a bit of an obsession to follow the lockdown zones and restrictions to see when it would open. In February, we went into the orange zone, and hurrah, the reserve was open - but the first week, Ted had to work all weekend. The second, our son brought a horrible cold back from school and gave it to me. The third - our region was pushed into the red again and the park was closed. Fourth for the win!!

To backtrack. For reasons I am not sure about, there is a shortish walk near the main shopping centre area of town that is part of the designated reserve, and we visited that back in October 2020. I'd never noticed it, though apparently my teenager knew all about it and had taken her little brother there unbeknownst to us. If you are going for the shopping/nature combo, or only some of the family can stomach shopping, I guess it's a nice outing. The layout is the same as the main walk, including a lookout tower, so I'll save descriptions for below.

This past weekend was a coldish spring day in our shady town centre, but it turned out to be bright and sunny out at the reserve. There is a small car park, for maybe 20 or so cars. The visitor centre was, of course, closed.

Near the entrance is a playground, and animal pen, which had one horse in it, though the reserve usually hosts several horses and native cattle. I suppose they were safely elsewhere for the winter/ Covid situation. The horse was pretty friendly - it gave me a horsey kiss then tried to eat my coat. There is apparently horse riding for children at certain times of the year.

The wetlands are basically a lagoon, formed over the past century as the island of Koper was gradually joined to the mainland. It has enjoyed protected status since the late 1990s. According to their website, it is at various times home to around 60% of all bird species spotted in Slovenia, a nesting area for dozens of species, and a key stop on migratory routes. Apart from this, it harbours a host of insects and amphibians, and many mammals, small and large, from the Etruscan shrew to roe deer.

I have to admit, this is not a nature reserve as I am used to it. There is one, gravelled, circular walk around the perimeter, and most of the time you can't actually see over the embankment or through the reeds and rushes to the reserve area. Instead there are lookout points with information at frequent intervals. There is also an enticing observation tower which was still closed because of Covid restrictions. I assume all this is to encourage and protect the wildlife, particularly any nesting or migrating birds.

(An aside: This is not a complaint about Covid measures in Koper or Slovenia in general, because I know the situation is similar in countries the world over. But why, in a time of health crisis, local and national governments are not prioritising opportunities to boost our physical and mental health, I do not know.) 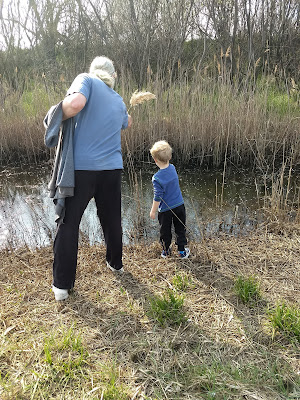 It's far from barren, though. The perimeter is bounded by ditches and ponds (freshwater, from river channels), and planted with native species, which are labelled for identification (in Slovene, Italian, English, and Latin for the botanists). In our edge-of-the-Mediterranean climate, tadpoles had already become froglets, and Alcuin had the joy of trying to poke frogs with an endless supply of dried reeds. (Don't worry, we did not let him torment any frog for more than a few moments.) My nature spotting skills are not what they were in my youth, but among the species we identified were fritillary butterflies, damsel flies, coots, reed buntings, little egrets, and swans of course (resident here in Koper, you can even spot them off the coast). 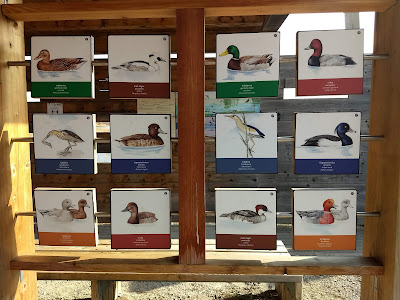 The observation stations have clear information (in Slovene, Italian and English), which made the closed visitor centre redundant, at least when a child is in tow. Bright, illustrated field guides, scientific information and children's activities, not to mention welcome benches, invite you to stop and learn. It's strange to look out over the peaceful wetlands and see in the distance the multicoloured walls of shipping containers piled up at the port.

It took us 1 1/2 - 2 hours to meander around with a small child, during which, the same jogger lapped us five times. I would not go there in the summer - I imagine the lack of shade and probable swarms of mosquitoes would make it miserable, but it was very pleasant on the lion's end of March. We will definitely be back, and I'd like to bring my bird-expert Dad there. Sticks and water are pretty much all a small child needs for an afternoon's entertainment.

Touristy stuff: Here is the website, which they seem to keep up to date (and which, yes, I should have consulted the first time we tried to go). If you are feeling very fit, you can take a long walk there from the town centre, which we did the first time, but not the second. The path is all gravel, so I don't know how accessible it would be to wheelchairs.