Linking up with Modern Mrs Darcy as usual. October was not a big reading month for me. One reason was this (sorry for the bad photo - it's from Messenger): 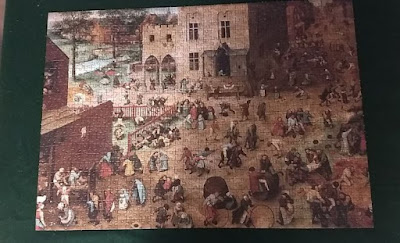 We bought this puzzle, Breughel the Elder's Children's Games, in the Kunsthistoriches museum, Vienna, in August, and I decided that the advent of autumn was a good time to get it out. It took my husband and I about a week, during which we neglected many other things (like reading). I also learned that a mathematician (husband) has a very different attitude towards doing a puzzle than an arts scholar (me). To me, it was about enjoying the emerging picture, to him, solving the problem as soon as possible. And P.S., if you like doing puzzles, I really recommend a puzzle mat.

The second reason was I felt unsettled for most of the month. Maybe it was the approach of the season where we tend to cosy up indoors, but I found myself dipping into two home-oriented books on my shelf/Kindle. Marie Kondo's The Life Changing Magic of Tidying Up obviously sparks joy because I still have it on my bookshelf - honestly, I love it as a quirky memoir as well as inspiration for tidying. The other was The House Witch by Arin Murphy-Hiscock. It's new-agey, but I'm a little that way inclined myself, so I like contemplating the spiritual aspect of keeping the hearth, even if I no longer have a house with a physical hearth. 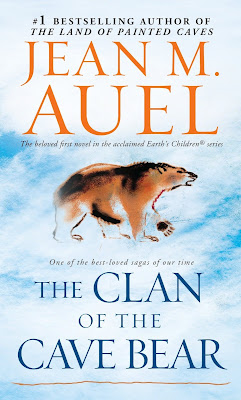 The final reason was my choice of audiobook:

I've never read this ground-breaking historical fiction from the 80s, but Chirp a dirt cheap deal, so I gave it a go. It took a little while to get into it, partly because the audio narrator did not seem especially suited to the book, and partly because the actual narrator is some sort of omniscient anthropologist, who gives all the technical and scientific details behind the story. But once I was into it, I was hooked. Usually, I have a reading book on the go at the same time, but I just couldn't think of anything that really complemented reading such a different book for me, so I stuck with this - over 22 hours of audio.

It tells the story of a Cro- Magnon girl, Ayla, rescued after an earthquake by a Neanderthal clan and adopted by their medicine woman and her shamen brother. Although loved by her adoptive family, she is always the outsider, her very DNA making her think and act differently than her new misogyistic tribe, and hated in particular by the clan leader's son. Through her we trace the final struggle taking place between these two branches of humankind. Interestingly, I've seen it described as a precursor to YA dystopias like The Hunger Games.

So there we go. Anyone else ever had the problem of not being able to pair a book and audio book? Are the others in the Clan of the Cave Bear series (Earth's Children) worth reading?